Some Perspective On The Japan Earthquake
A candid on-the-ground perspective of Japanese disaster management and recovery.

Japan’s Strict Building Codes Saved Lives (NY Times)
New York Times article about how Japan is the best-prepared country in the world for twin disasters of earthquake and tsunami.

Dubai on Empty (Vanity Fair)
Vanity Fair web exclusive on how Dubai is crumbling from the inside.

Each week I take three groups through the same material for the week – one class on Wednesday and two classes on Friday. Because of the fluid nature of the course, I find myself preparing my material a day or two before the first class (namely the Wednesday one).

Every group would take on the combined character of the personalities of the students who make up the group. Last year, it felt as though the first group for the week were rowdy and restless, the last group sweet as angels, and the second, well, somewhere in the middle.

Imagine how shocked I was when the groups this year acted exactly like the ones last year? First class, noisy and distracted; last class quiet and attentive; middle, middle. Heck, what are the chances of something like that recurring?

This made me think back on the way the material gets prepared and the way it evolves over the course of the three times it gets delivered. Here is what I discovered:

This discovery may very well explain more robustly why the students in the first class aren’t as attentive as the ones in the final one for the week!

Which brings me to the following conclusions.

It started with watching my friends share their thoughts on the one popular blogdrive platform, which progressed on to me running a home-spun php blog with 4 asp scripts and an mdb file, which evolved into me setting up a multiuser site based upon MovableType and our “social network” formed from a blogroll widget running down the side of the blog.

From then on it was a bit of a blur. Multiply came and went, Facebook came and swallowed up a vast majority of the bulky blogs and comment boards set up where all people wanted to do was share photos and do whatever “friends” do. Twitter came from the other end and gave our 140 characters a home and a shot at RT infamy. As for Posterous, Tumblr, friendfeed, etc. I’d watch from afar and the hype has seemingly died down before I’d mustered up the courage to entrust my thoughts and relationships to yet another “free” platform.

My thoughts on what a website would be for me has been seriously muddied, particularly over the past year. I’d watch as publishing platforms evolved. Companies find new ways to provide services, own your data, define your relationships, gather clout and monetize, monetize, monetize. On the other hand, the pressure to write slickly-edited valuable, interesting, technical pieces (with pictures!) to present myself as a knowledgeable professional has produced exactly 2 try-hard articles and another 7 or so drafts that I either terrified to Publish or to even finish. I even attempted a “what I learned today” type blog as an SEO experiment and give adsense a shot. The result? Just over 500 hits a month and around $18 ad dollars after two years.

So this is my resolution. I’m giving up on trying to make anything happen, and will instead amaze myself again and again with the thought that a click of a button would send these words into the vast interwebs of unfathomable possibilities. I will I will write firstly for myself, and secondly for anyone else who is interested. There may be only two of you out there, but that’s two more than I could ever hope for.

Every week, I get 3 hours with 60-70 students looking to equip themselves for the dark and evil world that is the creative industry. Before every class, I find myself having to choose between:

One might argue that both go hand in hand, equally and inseparably. I argue otherwise, stemming from an amalgamation of failed attempts, the awkwardness of the classroom setup and the sheer possibility that my competency as an educator is severely lacking.

My concession so far has been to give them the training and hope that when inspiration finds them, their tools will take them the distance.

How the heck can one claim to teach inspiration anyways?

When I bought the Microsoft Ergonomic Desktop 7000, the reasoning was that my work involved substantial use of a keyboard, so it would be a good idea to invest in an ergonomic one – wireless would be nice too. One year in, I can safely say that they keyboard was a worthwhile investment; but this post isn’t about the keyboard – it’s about the mouse that came with it.

The Natural Wireless Laser Mouse came as part of the Desktop bundle. Being a sucker for trying out new things, I gave myself a period of time to “break in” to the slightly foreign posture that your arm assumes when using one such mouse.

These pictures doesn’t really do justice to how weird it feels using such a contraption. If you can imagine gripping an upright soda can tightly and sliding it around on the table, that’s how it feels like.

The upright-ier posture did take the strain off my wrist as advertised. Rather than twisting my palm downwards to reach for a flat mouse – the mouse came to me.

After many months of attempting to get used to the mouse though, I still found it frustrating/slow to use but couldn’t understand why – until now. 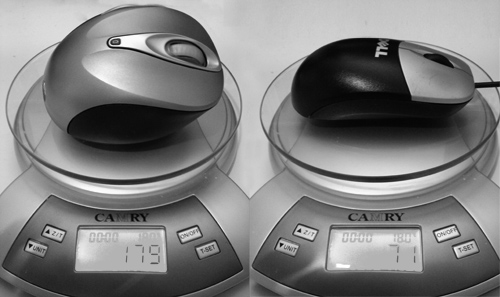 Firstly, this mouse is heavy. The wireless mouse weighs in at more than twice that of a standard issue Dell mouse (179g vs 71g), making it very tiring to push around all day. The heft comes mainly from the twin double-A batteries that power it.

Secondly, the ergonomic posture of the mouse actually immobilizes your wrist and forces you to operate it by moving your arms. You may not have notice this before, but chances are, you actually flick your mouse around using your fingers and wrist rather than your arm. This gives you more control when you’re performing fine movements like editing graphics or selecting a phrase of letters.

Finally, because of its “natural” organic shape, it’s hard to tell which way is “up”. The very first Apple USB Mouse suffered from a similar problem.

After a year, I given up learning to use this and swapped back to the unergonomic standard-issue Dell mouse. The keyboard is great though.