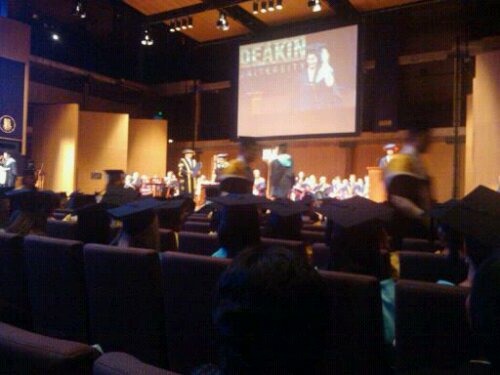 Make an announcement “Our graduates will be coming up in groups of 10 or less. So that we can hear all our graduates’ names called clearly, please save your applause for the end of each group.”

First few graduates take the stage. Isolated applause emerge from family/friends of graduate, followed by a feeling of embarrassment for disobeying the announcement. Being caught out as the cheering minority in the group also reinforces “it is not time to clap yet”.

First group completed, people on the stage clap – cueing the crowd to cheer along. Conditioning is complete. The crowd knows when to clap, and when not to.

Inevitable, a rogue group would cheer and clap loudly. The crowd snickers and scoffs at their irreverence. Immediately after one such an event, the friends of the next graduate attempts a similar feat but quickly backs off in shame.

Crowd feels sorry for them and vows never to find themselves in such a position.